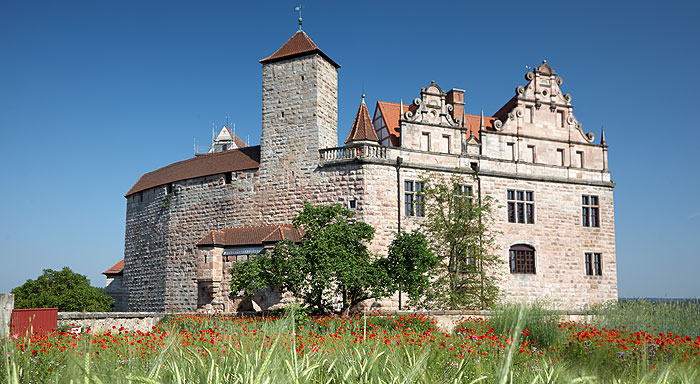 "Cadolzburg" was first mentioned in a document in 1157. In the mid-13th century the area around Cadolzbug was acquired by the burgraves of Nuremberg from the house of Hohenzollern, who were known in the Middle Ages simply as the Zollern. They originally came from Swabia, but after they were appointed burgraves of Nuremberg by the emperor in 1191/92, their centre of power shifted to Franconia.

When in the 14th century the Zollerns increasingly came into conflict with the citizens of the Imperial City of Nuremberg, they moved their seat of government to the nearby castle of Cadolzburg. In 1415 King Sigismund then appointed Burgrave Friedrich VI Elector of the Mark Brandenburg. From this time on the Zollerns were included among the seven rulers entitled to elect kings, and occupied an eminent position in the Old Empire, from which they eventually rose to become kings of Prussia in 1701 and emperors of the German Empire in 1871. This was how for a long time in the Late Middle Ages Berlin came to be governed from Cadolzburg and Ansbach.

The history of the Zollerns, with a focus on the Late Middle Ages, is on display in the exhibition “A castle and its lords. The Cadolzburg experience”.